I know I’ve spoken of the array of Montessori experiences in a variety of settings before.  If my time in Montessori these 30+ years is anything, it has been revelatory in the knowledge that this pedagogy thrives in such a wide spectrum of environments.  A hardy plant that grows where planted indeed.  Rural, urban, affluent, struggling, religiously-based, humanistic-themed.  That I have been afforded opportunities to teach in an airport hangar classroom in Haiti, a public school program in Seoul, a Christian-themed school in Indonesia, with a Muslim-owned Montessori materials company in the States,  a village-school in Ghana, etc…. is such a gift.  And this Fall, a conservative Judaic-based school in Maryland.

In a small town just west of Baltimore is a small but growing Montessori school named Darchei Noam, which translates literally as “pathways of pleasantness”.  This academic year, two new elementary classrooms have been launched by Head of School, Brocha Baum.  To say Brocha is a dynamo, a mere creator of energy, is to undersell the term.  She creates, harnesses, takes on too much, and gets it done anyway.  Have you encountered these people before in your lives?  Cindy Swenson with Project Okurase, Ladene Conroy in Charleston come to mind.  Montessorians that are tireless in their efforts towards a constantly evolving and expanding goal.  Anyway, after a summer session of teacher-training, we’re a few webinars into the school year, and it feels like I’m reading, for me, a new chapter in Montessori.   The differences are not small.  The classrooms are gender segregated, a boys class of 18 and a girls class of 14.  Judaic studies is an additional component of the curriculum.  In February,

I’ll be able to observe the classrooms in action, and I’m really looking forward to the experience.  But the discussions with the teachers echo a hundred conversations I’ve had with new teachers over the years.  “How do I engage the children in new work?”  “What do I do with a child that won’t settle during the work period?”  “How many presentations should I be giving a day?”

I’m confident this program will succeed.  The teachers are “on board” with the pedagogy and with the mission of the school.  And besides, Brocha will not allow anything less!

One of the experiences I’ll look back upon in my dotage, which some days feels like it’s speeding towards me like an oncoming truck, is being able to see Montessori changing lives in a wide variety of settings.  It’s been such a honor to work with teachers from a makeshift classroom in a factory in Port-au-Prince, Haiti to a private school in New Hampshire.  From a public school in Savannah, Georgia to a public program in Seoul, South Korea.  A conservative Jewish school in Baltimore with Hebrew sandpaper letters.  A Christian elementary school outside of Jakarta, Indonesia.   This past summer, I spent two weeks working with five teachers, soon to open the first “real” (not just in name only) Montessori school in the country.  Many thanks to Project Okurase, a non-profit organization doing so much good in Ghana, West Africa for the invitation.  Among its many efforts, such as an annual health outreach, adult vocational program, and a sustainable farm, they are starting a Montessori school in the village of Okurase, about an hour and a half northwest of the capitol city of Accra.   Two lead teachers and five assistant teachers were hired in June, but the two leads never showed up!  It became clear as I worked with the remaining five, that they were bonded, dedicated, and highly competent teachers.  By the time we had completed our weeks of teacher education, they were truly the lead teachers, committed to their craft, to the school, and to the community.  The school is named, “Nkabom Montessori School”, which means “unity”.  A better name you’ll seldom find.

Very nice to have been in San Diego for the weekend.  Aside from the fact that it wasn’t 8 degrees it’s always gratifying to be in the company of so many colleagues.  The variety of experience within the scope of “Montessori” is staggering.  It crosses geography, culture, and language.  Public and private, charter and magnet.  Differences emerge but they pale in comparison to the commonality of pedagogy and purpose.

Last week, while my home was being buried in 3 1/2 feet of snow, I escaped to Savannah for some more teacher training at Charles Ellis Academy, and observations at schools throughout Low Country. It was with great anticipation that I observed in some schools that I had heard about but had yet been able to visit.  James Simons and Murray-LeSaine are both in Charleston, SC.  Low Country Montessori, Beaufort Elementary, and River Ridge Academy, between Savannah and Charleston, were all new to me.  It’s with special interest that I observe Montessori being employed in a variety of locations and environments, with a diversity of students, but with a common thread of pedagogy.  The rise of Montessori in the public sector is simply stunning.  In 2002, there were barely 200 such schools, by 2015 there were nearly 600!  If what I observed is any indication of the quality of Montessori education, then certainly the kids are all right.

Many thanks to Helen Ross and the faculty of Ridgewood Montessori School in Paramus, New Jersey for hosting me on Monday, January 16th.  Dr. Montessori’s Five Great Lessons was our topic and the discussion could not have been richer and more informative.  I was so impressed by the interest and energy of this wonderful group of colleagues.

“Follow the Child” was just reviewed in the latest issue of Montessori Life (Fall 2016).  Click the link icon below to check it out! 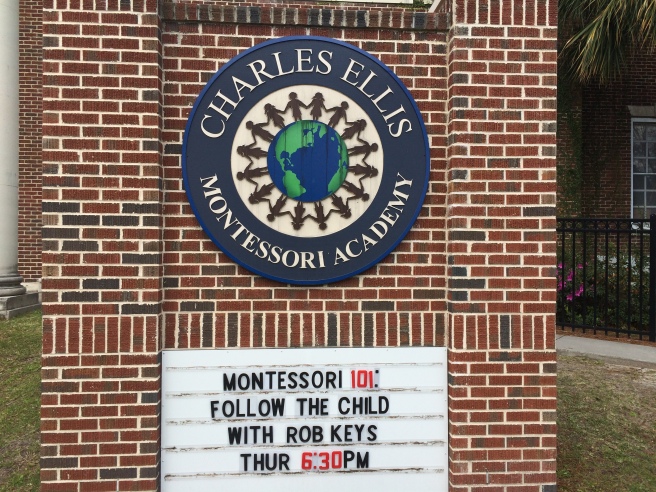 Wonderful to have the opportunity to speak to parents at the Charles Ellis Montessori Academy, the largest provider of Montessori education in Savannah, a public K-8 magnet school serving 560 students.  Looking forward to continuing teacher education with these dedicated teachers this summer!

Welcome to the website that I created in support of my book, “Follow the Child – The Basics, the Misconceptions, and Underlying Lessons of a Montessori Education”.  I would love to hear from you!  Specifically, in the vast wash of Montessori sites, blogs, and podcasts, what’s missing?  What’s needed?